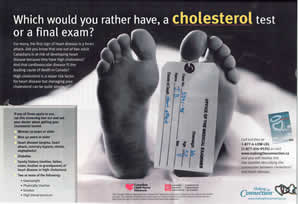 Should a pharmaceutical manufacturer be allowed to use misleading information on cardiovascular risks, and the Canadian public's understandable fear of death from heart disease, in order to promote sales of its product?

In August 2003, the Director and staff of the Essential Drugs and Medicines Policy Division at the World Health Organization (WHO) wrote a letter to the Lancet, calling on health authorities to, "urgently increase their vigilance with respect to drug promotion," citing a recent ad campaign financed by Pfizer in France to promote their cholesterol-lowering drug, atorvastatin (Lipitor). Dr. Jonathan Quick and his colleagues at WHO charged that the ad campaign, "contained misleading statements and omissions likely to induce medically unjustifiable drug use or to give rise to undue risks." 1

The same ad campaign has been running in Canada for at least 18 months in magazines and on television, and has been the subject of complaints to Advertising Standards Canada by members of the public. The Canadian version, although financed by Pfizer, only states that it is 'sponsored by one of Canada's research-based pharmaceutical companies'. This is in very fine print, with logos of the Canadian Lipid Nurses Network and the Canadian Diabetes Association more prominent. The television ad also fails to clearly state that it is financed by Pfizer. Thus in addition to presenting misleading information on cardiovascular risks – the same misleading information as in the French campaign – the fact that this is paid advertising by a pharmaceutical company is obscured.

Along with a recent copy of the ad (October/November 2003, Healthy Woman magazine), I am enclosing a complaint letter sent to Advertising Standards Canada (ASC) by Mr. Terence Young, ex Member of the Ontario Provincial Parliament, and the father of Vanessa Young, the 15-year old woman who died after taking cisapride (Propulsid). When he made his complaint, Mr. Young was told that if he went to the media this complaint would not be investigated. This is not the only complaint made to Advertising Standards Canada about this campaign.

We are very concerned that, whether investigated or not, the ad has continued to run for months, and there is no sign thus far of any regulatory action to prevent the company from running this ad or to correct the misinformation reaching the public.

What is the risk for Canadians? In exaggerating the risks of cholesterol among those without previous heart or vascular disease, the ad campaign also downplays much more important preventable risks, such as smoking, obesity and diabetes and neglects health promoting activities that are shown to be successful such as healthy eating, exercise, and stress reduction. In playing so dramatically on the public's anxieties, these ads will certainly lead to unnecessary drug use among those with no likelihood of benefit. The ad campaign conveys a claim that those without previous heart disease can avoid sudden deaths from heart attacks if they get their cholesterol tested and treated. This claim contradicts existing scientific evidence about what these treatments can and cannot do. A recent systematic review of clinical trials of cholesterol-lowering drugs for primary prevention found a small cardiovascular benefit and suggested no overall health benefit, in terms of serious morbidity, hospitalizations, disability or death. 2 Furthermore, small cardiovascular benefit was limited to middle-aged men and was absent for older men and women (28% of the population studied). 3 This is described in two recent Therapeutics Letters produced for British Columbia physicians and pharmacists, which we have enclosed.

Another risk for Canadians, is the misplaced use of public and private funds on this type of publicity -- and the extra health care services it generates -- when they could be allocated to more effective investments both in the health service sector and the health determinants sector.

We ask your department to take immediate regulatory action to stop this ad campaign and to impose sanctions to prevent future similar violations. Pfizer should also be required to finance a corrective advertising campaign within the same media and at the same intensity level as this campaign.

We would also appreciate feedback on the following:

Thank you in advance for your assistance. Ensuring that the public is protected from misinformation on health and medical treatments  particularly misinformation that takes advantage of the publics fear of death and disability  is a key regulatory function with important implications for public health.

If you have any questions or require further clarification or additional information, do not hesitate to get in touch with us.

on behalf of the Steering Committee of Women and Health Protection:

and affiliated members of Women and Health Protection: